Gather those yellow flowers to make this sweet dandelion syrup with cane sugar, raw honey, and lemon. Perfect for pancakes, waffles, and your morning tea!

Are you sick of hearing me talk about dandelions yet? 😉 Well, I promise today’s post is really fun and exciting – we’re making dandelion syrup! You know, like for pancakes and waffles…and tea, and just about anywhere you would use syrup!

I’ve been wanting to make dandelion syrup for a while, and it just kept getting pushed back. But when I was out in the yard this week and saw that many of the dandelions had started to go to seed, I knew I had to act quickly to harvest what was left of the yellow flowers – and I knew exactly what I wanted to use them for!

Over 2 days, I gathered about 125 flowers. It sounds way more daunting than it really is; it went by very quickly actually.

I brought them inside and rinsed them under cold water and then laid them out to dry on a towel. I left them like that for a while, to be sure they were completely dry and that any bugs lurking inside the blooms were long gone (I could actually see them crawling away on the towel!).

You can also skip the washing step to preserve the pollen, which is good for the immune system (thanks to our reader, Bonnie, for this tip!)

Then, I removed the petals from the thick, green base. The base is filled with a bitter, white liquid, so you don’t want any of that bitterness to end up in your final product.

You can remove the petals by squeezing the green base and rolling it between your fingers to loosen the petals. Or use a small knife and cut as close to the green base as possible, which is much quicker and easier. You can also just use scissors to snip off the green base.

You may get some small pieces of green leaves, but that’s ok. As long as the thick green base is removed.

If you want to make the syrup at a later time (ie: not right after you cut the petals), you can put them in an air-tight container or freezer bag and pop them in the freezer until you’re ready to use them. That’s what I did earlier this week with the first harvest.

How to Make Dandelion Syrup

Alright, prep work is done, let’s get to the sweet stuff! Bear in mind that this is a 2-day process, so if you want to use the syrup for tomorrow’s breakfast, you will have to start making it today!

Put the petals in a pot and cover them with water. Bring them to a rolling boil and let them boil for about 30 seconds to a minute. Then, remove them from the heat, cover, and steep the petals over night. You can either leave the pot in a cool spot in the kitchen, or put it in the fridge. I let the pot cool down a bit on the stove, then I put it in the fridge.

The next morning, you’ll strain the petals from the water over a small bowl. You can use a fine mesh strainer, and press the petals with the back of a spoon to extract as much water as possible. Or line a colander with some cheesecloth and squeezed the water out that way.

Return the strained liquid to the pot along with the sugar, honey, and lemon. Bring it to a boil, then lower the heat and let it simmer, uncovered, for about an hour, or until it has reduced by half.

Check the consistency after about an hour. Dip a spoon into the syrup, let it cool a bit, and test the thickness. If it’s thick enough for your liking, just turn off the heat and let the syrup cool. That’s it – you’ve made dandelion syrup!

After the syrup has cooled down a bit, pour it into a glass jar or container of some sort, and make sure to store it in the fridge after use. I have a small syrup dispenser that I picked up a few years ago; I filled it up and kept the extra in a glass jar.

My husband is coming back from a business trip tonight, so we’ll try this syrup over my whole-wheat banana chunk waffles tomorrow morning. But of course, that hasn’t stopped me from sampling it on its own in all its sweet, syrupy goodness. You know…for research, of course! 🙂

EDIT: Ok, I made the waffles the next morning, topped them with sliced strawberries and this syrup, and OMG! Best. Combo. Ever! Here’s a picture of the finished product! 🙂 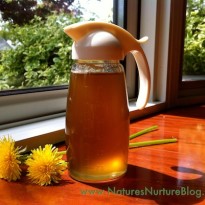 5 from 2 votes
Print Pin It
By: Sarah UmmYusuf