This homemade dish soap is made with simple, non-toxic ingredients.

UPDATE: I have since stopped using this dish soap recipe. It is way too finicky and inconsistent, and it just wasn’t worth the time or effort anymore. I now use a natural, non-toxic dish soap from Nature Clean (Canadian company), but have also used Seventh Generation, and even Sal Suds with great results!

The dishes never end. Ever.

Why is that? What kind of ridiculous law of physics has mandated that the dishes never end?!

You’ve worked so hard, diligently washing, scrubbing, and rinsing every dish, cup, and utensil that’s scattered in and around your sink. You’ve scrubbed the sink, dried the counters, wiped down the faucet, and your sink is looking pretty darn hot right now, am I right?

And then it happens.

That moment that catches you completely off guard and makes you want to go crawl into a corner, assume the fetal position, and rock yourself back and forth, assuring yourself that everything will be ok.

That moment that gets you to throw your dish gloves in the air, mutter something to the tune of, “arghh, forget this!” and just crack open that pint of ice cream you hide in the back of the freezer, because darn it – you’ve earned that ice cream!

I’m talking, of course, about that collection of dirty pots and pans that’s still sitting on your stove. Staring back at you, covered in grease and food spatter. You know the ones…

But they don’t stay there for long, because as soon as you’re done eating that ice cream straight out of the tub (shhh, I won’t tell…), you’re going back for those little buggers. Each and every one, until you’ve won this dishwashing war once and for all!

…and then it starts all over again. Because, of course, the dishes never end!

Every single recipe I’ve tried just kept falling short. It didn’t suds enough (I know suds isn’t a sign of clean, but it was more than that – it just didn’t work!), or it wasn’t soapy or slippery enough, or worse – it left a nasty film on my dishes. There are lots of factors at play of course (type of soap, water hardness, etc.) so I’m not saying that those recipes didn’t work – just that they didn’t work for me.

So when I came across this recipe by Jerica from Sustain, Create, and Flow, I was a bit apprehensive at first. But then I read the post in its entirety, including all of the comments, and felt very optimistic.

Let me tell you first that I’ve tried just diluting Dr. Bronner’s liquid castile soap to use as a dish soap, and although it kind of got the job done, “kind of” just wasn’t enough for me. I love Dr. Bronner’s soaps for so many things but a simple dilution just wasn’t cutting it this tme.

What I loved about Jerica’s post is that she included a quote from Dr. Bronner’s daughter, Lisa, which explains why vinegar should not be used in recipes that call for castile soap – yes, a few of the recipes I’ve tried did call for vinegar and even if the vinegar is added at a different time, the resulting dish soap always left that weird film on my dishes. Lisa’s quote explains why,

In great part it’s due to the fact that vinegar is an acid and the castile soap is a base. They will directly react with each other and cancel each other out. So, instead of getting the best of both (the scum cutting ability of the vinegar and the dirt transporting ability of the soap), you’ll be getting the worst of something entirely new. The vinegar “unsaponifies” the soap, by which I mean that the vinegar takes the soap and reduces it back out to its original oils. So you end up with an oily, curdled, whitish mess. And this would be all over whatever it was you were trying to clean – your laundry or counters or dishes or whatever.

For this homemade dish soap recipe, all you need is some grated bar soap, liquid castile soap, washing soda, and some (optional) essential oils.

I used Dr. Bronner’s baby mild bar soap and liquid soap. Washing soda (NOT the same as baking soda) can be found in your laundry aisle near the Borax. It’s in a bright yellow box, but if you can’t find it locally, you can either purchase it online at Amazon, or try making your own from some baking soda. I used orange and tea tree essential oils because I love the smell of citrus in the kitchen and the tea tree is anti-bacterial, but you can experiment with all sorts of fun scent combinations!

The recipe is super easy too.

You’ll just mix the grated soap flakes with some boiling water and stir. Once the soap is dissolved, you’ll add the washing soda and stir, then add the liquid castile soap and stir. Once the mixture has cooled, you can add your essential oils, then transfer the mixture to a repurposed container (an old dish soap bottle works great!).

Jerica even has a neat tutorial on how to turn a mason jar into a soap dispenser (then you can just make up the batch right in the jar!).

So How Well Does It Work?

Well, this stuff works! It looks, acts, and feels like a real dish soap – it bubbles up nicely, cleans very well, and rinses away with no nasty film or residue.

It starts out very liquidy but it thickens up as it sets. The first day it was completely clear like the photo at the beginning of this post, and by the next day it had become a thick, white product. But I just shook it up real well and it loosened right up and was more gel-like, which totally works for me.

If it’s too thick to shake up, I just add a little warm water, give it a good shake and it’s good to go. Since not all kitchens or water systems are the same, your soap may behave a little differently depending on the temperature of your kitchen and the hardness of your water. You can play around with the amount of washing soda in the recipe until you find an amount that works best for you.

I was tempted to make up a double batch next time, but realized that if I did that, the soap wouldn’t have much room to move around when I shook it. So I’m sticking to the single batch recipe for now…

Important Note on Dishwashing Method: I just wash my dishes with a wet sponge and soap – meaning that I don’t fill the sink with water and let the dishes soak. The soap has great suds on the sponge, but I have to make sure I don’t add more water to the sponge after I’ve put soap on it because then the soap starts to lose its suds. So I can imagine that using this soap with the soaking method probably wouldn’t work very well.

An all-natural, homemade dish soap that works just like the real thing! Suds up nicely, cleans well, and rinses off without any residue.
Print Pin It
By: Sarah @ Nature’s Nurture

Soap mixture will harden as it sets. If it’s too thick to pour, just add a tiny bit of warm water and give it a good shake to loosen it up.
The amount of washing soda you use will dictate how thick the soap gets, so adjust accordingly. The temperature of your kitchen is also a factor. Adapted from Sustain, Create, and Flow

What’s one homemade product that you’ve attempted and failed at a few times before finally finding “the one”? 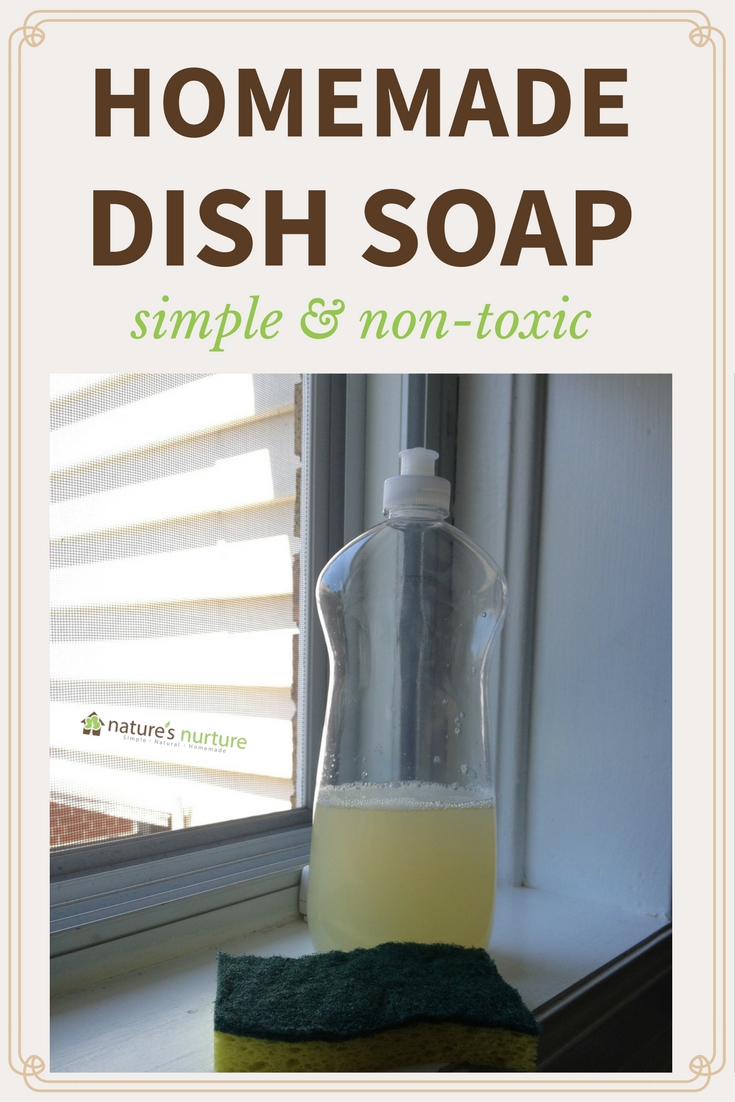